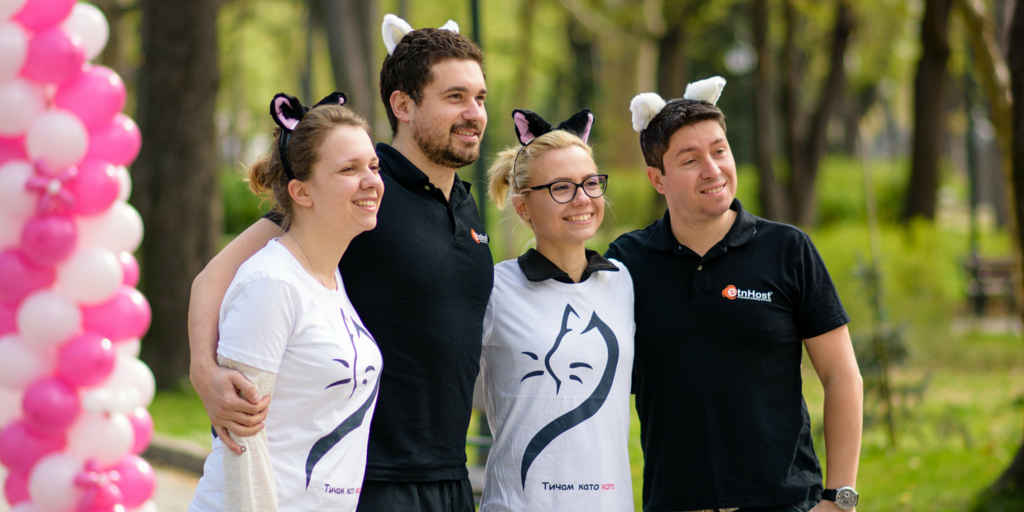 For the team of ETNHost, this Sunday morning was filled with excitement, cheer, and kitten ears. Our team of Host Busters faced their greatest challenge yet – to get up early on a Sunday to participate in a race. But not just any kind of a race, but one with a cause – to raise money for stray cats of Plovdiv.  And let me ask you, what is cuter than furry cat ears and pointy cat whiskers? Well maybe not cuter but just as adorable –the answer would be IT specialists, not in shorts (except for our one cool cat who was maybe a little too dedicated to the cause) but wearing pointy, furry cat years.

But let me explain a little bit more about the initiative. The Association's primary purpose was to promote its movement and to attract new followers as well as to inform the general public about the problems concerning the stray cats. Let's face it, there are lots of stray animals running the streets, and all those furry friends suffer from poor nourishment, diseases or even quite often are harmed by humans. All of this is A very serious issue for us here at ETNHost. We take the mistreatment of animals quite seriously, and this is why we were so thrilled to be a part of the event.

So let's go back to that historic Sunday morning. The ETNHost busters were highly trained and ready for the race, the nature of which was non-competitive organized run of 1.4 kilometers, but much like in every sport, they were eyeballing the first place. ETNHost was represented by our four host busters, all of which possessed the speed of a cheetah, the heart of a lion, the adaptivity of a tiger and the alacrity of a wild cat. They were ready to run like the wind. Two of our web host busters Atanas Gadjev and Asen Taskov were already very experienced with races and marathons, having already participated in one back in 2015. The marathon in which they had participated in the previous year was 21 kilometers organized run, which pretty much made them pros.

The girls, however, had to bell the cat with this one, since they were not at all prepared for the race. But even that didn't break their spirit. The cause was enough of an incentive. Knowing that their efforts were all for the better good of our whiskered friends. So even though the guys were strong and fast runners, they decided to be the purrrfect gentlemen and to embrace the non-compete nature of the race. And slowly but surely the Host Busters ran to the finish.

So today being the National Stray Animals Day, we want to bring this question up, and to a raise  little awareness on the matter. Today, there are more than 600 million stray animals in the world. They don't have a home or someone to care after their health. They rove the streets alone and miserable, and no living soul deserves it. So we, as animal rights supporters encourage you to be more active and help in any way you can and desire to those little furry friends in need.

So if you want a nice domain, a purrrfect web hosting plan that fits your needs, a team of animal-loving, cat-hugging, dog-feeding, plants-planting, nature-supportive people then Who ya gonna call? ETNHost Busters!