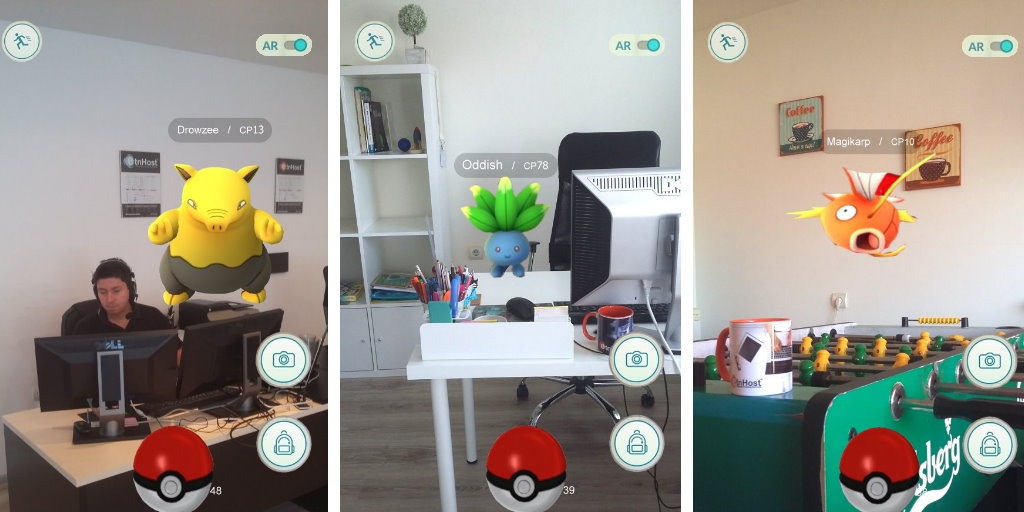 With the release of Pokémon Go the world became obsessed with hunting and catching the little virtual creatures. All of this seemed like a good way for the kids to go out and explore the world beyond the computer screen. To get a little more acquainted with the real world surroundings. Yeah, it all seemed all fun and games until THEY took a hold of US.

Let me tell you the story of our good colleague Atanas. He was the one who introduced these creatures into our lives. Before him, we have only been hearing the funny stories of people hunting Pokémon, rummaging the streets with phones in their hands and with distant looks in their eyes. It sounded a little bit strange, but kind of cool as well.

This Monday, Atanas installed the game on his phone and introduced it to us. Naturally, as a team of young IT specialists, we were really excited to see the game in action. The little Pokémon were so cute. One by one, all of us started installing the app on our own phones and one by one all of us started collecting more and more Pokémon and gaining more and more experience points. It was fun, or at least that is what we initially thought.

The last couple of days has been a blur since so much has happened. On Monday Atanas introduced us the game, and by the end of the day, we were all hooked. On Tuesday morning we discovered that our office was populating with Pokémon. We were initially thrilled but what we didn’t realize was that having activated Incense - the mysterious fragrance that lures wild Pokemon to your location, we have opened the Pandora's box... Our phones were constantly telling us that there is a Pokémon nearby. By the end of that day, we thought we were hallucinating. We were able to see the Pokémon with our own eyes just standing on our desks, on the couch, in the kitchen, just looking at us, as if they were studying our working process . It was nuts. We thought that we were just tired and that a good night sleep would fix it all. We were wrong.

By Wednesday morning some of my colleagues were missing. Our Sales and Marketing manager, Elena, had vanished and in her place, on her desk, there was a Pokémon, just casually sitting in her chair. By the end of that day, Atanas was also gone.

We should have seen the signs. What we thought were hallucinations were actual, real Pokémon, which has somehow entered the real world. The particularly peculiar thing, however, was that we were the only ones who were able to see them. No one else in the building did.

Today as I came to work I noticed that the sign that once said ETNHost Premium Hosting Services has now been replaced by ETNmonHost Premium Pokémon Hosting. As I am typing these words, our servers are being administrated by Pokémon, our clients are being serviced by Pokémon and our firm is being run by Pokémon.

Let our story serve as a cautionary tale. Always be careful when you activate the  Incense feature because once they come...they come to stay.